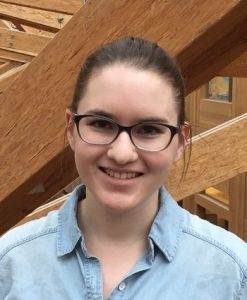 Fermentation of lignocellulosic-derived sugars, such as those found in poplar, offers a promising source of renewable bio-based products. However, cell walls found in potential lignocellulosic feed stocks are composed of a complex, chemically linked matrix of cellulose, hemi-cellulose and lignin making their woody tissues highly recalcitrant to extraction of the available cell wall carbohydrate.

Monolignols are the phenolic monomers that polymerize to form lignin. Recently, the successful incorporation of non-canonical monolignols into lignin polymers has introduced the possibility of producing novel “designer lignins” which reduce cell wall recalcitrance to extraction of fermentable sugars for use in biofuel production.
My research aims to further investigate novel methods of altering lignification in poplar to improve lignin’s amenability to depolymerisation through incorporation of alternative monolignol units. I am working to engineer Arabidopsis and poplar trees (Populus alba x grandidentata), to synthesize alternative phenolic monomers, in order to determine if they can be successfully incorporated into lignin, and if incorporation of these non-canonical monolignol units into lignin impacts cell wall recalcitrance and ultimately improves efficiency of biomass processing.